Prayer of the Society of St Tarcisius

Prayer of the Society of St Tarcisius (for private use)

Lord Jesus, I profoundly adore Thee, really present in the Most Holy Sacrament of the altar. I love Thee, and desire to love and serve Thee more perfectly. I do reparation to Thy Sacred Heart, for the negligence and indifference which is often shown to Thy true Body and Blood.

I thank Thee for the great privilege of serving Thee on the Sanctuary, and resolve for the future to serve Thee with greater fervour, devotion, attention, and exactness. O Lord, let my example when on the Sanctuary never be an occasion for scandal to my neighbour, but rather encourage others to greater reverence. May I always act as I believe, and show by my example my belief in the great truths of our Faith.

Most Blessed Mary, Mother of our Lord, obtain for me by thy prayers the grace to serve thy Son with reverence and devotion.

Saint Tarcisius, pray for me, that I may follow thy example by defending the honour of the Blessed Sacrament all the days of my life and even unto death. Amen.
Posted by davidforster at 00:30 1 comment:

A hearty welcome to ten new members who were enrolled on Friday 7th June, the Feast of the Sacred Heart of Jesus.

New members will be receiving their membership cards and membership information shortly.

These members enrolled after a very successful training session which was held two weeks ago at St James' Spanish Place in London.

May the Hearts of Jesus and Mary strengthen and protect all altar servers, and all our members old and new.
Posted by davidforster at 10:06 No comments: 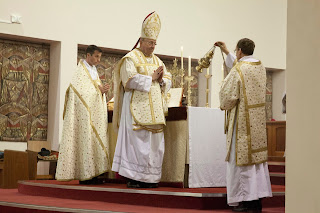 Rt Rev Malcolm McMahon, Bishop of Nottingham, opened the conference with a Pontifical Mass of the Annunciation. Afterwards, Bishop McMahon addressed all the participants, putting forward some suggestions of ways to heal the rift that exists between enthusiasts for the older form of the Mass and some of those who oppose its widespread use. This led to a lively discussion.
As in recent LMS conferences, tuition was given to both priests and servers in the Extraordinary Form of the Mass. There were also optional Latin classes.
There was a Sung Mass (either chant or polyphonic) each day, as well as Lauds, Vespers, Benediction and Compline. Together with private Masses, these services gave ample opportunity for participants to put into practice much of what they had learned. The musical settings were provided by the Rudgate Singers, with Christian Spence as organist.
LMS Chairman, Dr Joseph Shaw, said: 'The LMS training conferences continue to show their value in giving priests and servers hands-on experience and expert tuition, including the more complex liturgical roles; this year's conference attracted priests from Scotland, Poland, and South Africa, from the Ordinariate of Our Lady of Walsingham. We also welcomed two seminarians: a Dominican, and a transitory Deacon studying at Oscott for the Diocese of East Anglia. The Leicester conference was also a very convivial occasion and a rare opportunity for like-minded priests, servers, and singers to spend time together.'
One of the tutors teaching servers said: ‘Two of the young married men who were in my group and hailed from Glasgow confessed to being "blown away" by the content of some of my talks on the spirituality and symbolism of the simple Low Mass. The eldest participant was similarly impressed with reading The Mass in Slow Motion by Mgr Knox at his own pace to place the Mass back in context for him.
‘I am unused to suddenly having my photograph taken whilst standing in front of some of my Power Point projections as I work, but this week has been something else. Another young man who had only ever encountered the old Mass once whilst on holiday last summer with his family was similarly moved by his experience of seeing the Mass close up. I was extremely privileged this morning to attend a "private" Mass served near perfectly by this lad.’
Posted by davidforster at 12:04 No comments:

It is now possible to download serving notes for Holy Week, according to the 1962 usage, from the fine website of Romanitas Press: http://romanitaspress.com/index.htm. The form there is adapted for use at ceremonies without a deacon or subdeacon.

"These FREE notes include detailed instructions for the servers (and celebrant), diagrams, footnotes and many tips and explanations concerning preparations and the execution of the ceremonies not found in other manuals."

[It may be noted that there is a slightly different version of the same notes available, with adaptations as practised by the SSPX, on http://acss.sspxusa.org/rubrics.aspx For those who didn't know, the SSPX commonly uses the 1962 usage, but with a few pre-1955 customs, as practised at the seminary of Econe.]

There is also, on the same website, a new chapter of "Peregrinus Gasolinus: Wandering notes on the Liturgy", which is both amusing and informative.

PUSCO'S
(Chapter 36)
We have finally arrived at Pusco's Church Goods - and what an adventure is in store: from forbidden altar boys' cinctures, capes and zuchettos, to incorrectly-made albs... causing the Liturgiologist to explode in righteous rubrical indignation. .... Read more.

Posted by davidforster at 18:44 No comments:

A Spiritual Bouquet for Pope Francis 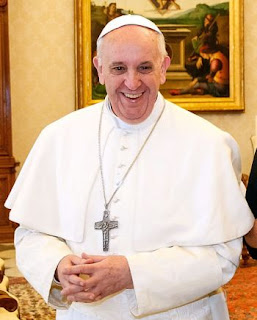 The Latin Mass Society is gathering together a Spiritual Bouquet for our new Holy Father, Pope Francis I.

We are asking you, our members, supporters and friends, to help us with this.

We are encouraging everyone to ask priests that they know to celebrate Masses in the Extraordinary Form for the new Pope, that he may receive the graces necessary to fulfil the duties of his new office (you should pay the priest a stipend for this - suggested minimum offering £10). We are also asking you to offer up rosaries and other prayers and devotions for the Pope. In particular, offer up your Communion for the Pope.

The Pope has asked for our prayers to help him in his new office. Let us respond generously to his call. As Catholics, the Church has always asked us to pray, in charity, for others, living and dead, but one of the people She has always specifically requested the faithful to pray for is the Pope. This is a good and holy Catholic tradition. Let us live up to that tradition. Offer a priest that you know a stipend to celebrate a Traditional Mass for the Pope, or offer your daily rosary for Pope Francis, or add him to your intentions in your daily prayers, or offer a novena for him. The choice is up to you.

Once you have done this, or decided that you will do this, email or write to us at the LMS to tell us how many Masses, Communions, Rosaries or other prayers and devotions you have offered, or will offer, for Pope Francis. Please let us know as soon as possible. In fact, why not do it today?

These will then be gathered together and presented to the Holy Father on behalf of the Latin Mass Society and its supporters and friends. You don't have to be an LMS member to take part in this spiritual initiative.

There will be a day of server training starting at 10.30am on Saturday 16th February at the University Chaplaincy in Leeds.  Boys and men are invited to to attend and are asked to bring their own packed lunch.

Tuition will be tailored to individual requirements and will be suitable for all levels of experience, including beginners.

The day will end with Mass at 4pm.

Your Sodality Needs You!

What are the plans of the Sodality for 2013? That depends largely on the members!

For those who don't know, the Sodality has no large Headquarters, full-time staff, and professional organizers. It only has its members.

There is in fact a Secretary (shared with the Latin Mass Society) and some secretarial support from the LMS Office. Beyond that, it's entirely up to the members.

The Secretary is responsible for enrolling new members and keeping the records, providing joining booklets for new members and various other materials, and updating this website from time to time.

The following are also planned for 2013:

Production of the St Tarcisius Medal for full members;
Editing of a number of guides for servers, which will be available for download or purchase;
An email bulletin at least every quarter;
Possibly a day of training for MCs, probably in the South of England.

The following would be particularly welcome:

If you would like to offer help with any of these, please email secretary@saint-tarcisius.org.uk

Posted by davidforster at 17:59 No comments: