The Latin Mass Society of England and Wales is currently seeking a new editor for Mass of Ages magazine, as the current editor, John Medlin, will be retiring from this position later this year.

'Mass of Ages' is the quarterly magazine of the Latin Mass Society and is, with its website, one of the two principal ‘shop windows’ for the Society’s work, as well as a vital means of communication with members. It is therefore a high priority for the Society.

The magazine’s current look was developed several years ago and the time has come for a thorough revamp, both in appearance and content, to bring it into line with the Society’s developing and expanding activities and priorities. We are also proposing a number of technical changes in the way in which the magazine is produced. The new editor will be intimately involved in these changes at what is an exciting time for the Society.

As well as journalistic and relevant technical experience, the new editor will have a deep and sympathetic knowledge of the Traditional Catholic world.

If you would like more information, including salary details and job description, please contact LMS General Manager Mike Lord by email on michael@lms.org.uk or phone him on 020 7404 7284 for a confidential talk.
Posted by davidforster at 20:22 No comments: The Latin Mass Society's annual Day of Recollection is taking place as customary in St Edmund's College Ware, Herts. The College boasts one of the finest chapels of E.W. Pugin in the country, and the only one never to have been reordered.
The LMS always has distinguished priests preaching these days of recollection; this year they will have Fr Michael Cullinane, a long-term friend of the LMS and a scripture scholar. He is the head of the theology department at Maryvale Institute in Birmingham.

Father Cullinane will celebrate High Mass in the Traditional Rite at 12 noon. The day will conclude with Solemn Vespers and Benediction at 3.30 p.m.
The cost of the Retreat will be £5.00. Participants should bring their own lunch, although tea and coffee will be provided.
For those wishing to attend, more information is available from Eric Caudle (email:egthebm@btinternet.com) or Mike Mason on 01983 567996 or (M) 07810 778160.
Posted by davidforster at 12:32 No comments:

LMS welcomes news from the Wirral

“The Latin Mass Society warmly welcomes the news that Bishop Mark Davies is negotiating with the Institute of Christ the King Sovereign Priest (ICKSP) to enable the ICKSP to assume responsibility for the much-loved Church of SS Peter and Paul on the Wirral and for it to become a centre for Eucharistic devotion. The local membership of the LMS has been campaigning for the church to be reopened and for the Traditional Latin Mass to be regularly celebrated there.

This initiative is sure to promote Church renewal in Shrewsbury diocese to the great benefit of all Catholics regardless of which Form of the Rite they are attached to. The LMS will offer every help and assistance to Bp Davies and the Institute to bring their plans to fruition and invites all those attached to the Extraordinary Form to pray for Bishop Davies’ intentions.

Doctor Joseph Shaw, LMS Chairman, said: ‘This initiative is a clear expression of the harmonious reintegration of the Extraordinary Form into the life of the Church which Pope Benedict XVI so patently desires. It is a wonderful idea to have a centre for Eucharistic devotion in Shrewsbury diocese and the ICKSP are second to none in their devotion to Our Blessed Lord in the Sacrament of the Altar’.

The LMS provides regular financial support both to the Institute of Christ the King (ICKSP) and the Fraternity of St Peter (FSSP) for their missions in England and Wales to reintroduce use of the Extraordinary Form; further financial support is given to English and Welsh seminarians at ICKSP and FSSP seminaries.”
Posted by davidforster at 14:01 No comments: 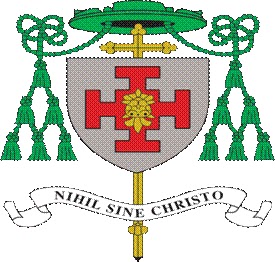 The Catholic diocese of Shrewsbury: http://www.dioceseofshrewsbury.org/
Institute of Christ the King, Sovereign Priest: http://www.institute-christ-king.org/home/
Posted by davidforster at 14:00 No comments: