Our Lady, Queen of All Saints 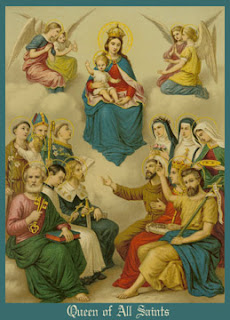 "Let all, therefore, try to approach with greater trust the throne of grace and mercy of our Queen and Mother, and beg for strength in adversity, light in darkness, consolation in sorrow; above all let them strive to free themselves from the slavery of sin and offer an unceasing homage, filled with filial loyalty, to their Queenly Mother. Let her churches be thronged by the faithful, her feast-days honoured; may the beads of the Rosary be in the hands of all; may Christians gather, in small numbers and large, to sing her praises in churches, in homes, in hospitals, in prisons. May Mary's name be held in highest reverence, a name sweeter than honey and more precious than jewels; may none utter blasphemous words, the sign of a defiled soul, against that name graced with such dignity and revered for its motherly goodness; let no one be so bold as to speak a syllable which lacks the respect due to her name."
Pope Pius XII, From the Encyclical Letter, Ad Caeli Reginam, On the Queenship of Our Lady (11th October 1954)

Hail Queen of Heaven, the Ocean Star
Guide of the wanderer here below
Thrown on life's surge, we claim thy care,
Save us from peril and from woe.
Mother of Christ, O Star of the sea
Pray for the wanderer, pray for me.

O gentle, chaste, and spotless Maid,
We sinners make our prayers through thee;
Remind thy Son that He has paid
The price of our iniquity.
Virgin most pure, O star of the sea,
Pray for the sinner, pray for me.

And while to Him Who reigns above
In Godhead one, in Persons three,
The Source of life, of grace, of love,
Homage we pay on bended knee:
Do thou, bright Queen, O star of the sea,
Pray for thy children, pray for me.


(Fr John Lingard)
Posted by davidforster at 00:21 No comments: 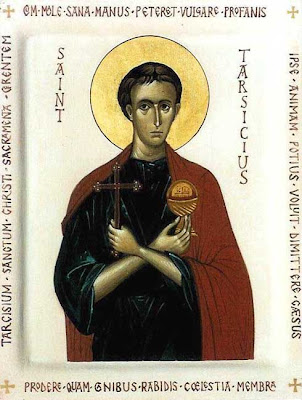 Blessed John Henry Newman on Mary the Mother of God

Today is the first feast day of the Blessed John Henry Newman, and Monday is the Feast of the Maternity of Our Lady, so what better than the words of JHN on the Theotokos?

These are from 'Discourses to Mixed Congregations'.

Mere Protestants have seldom any real perception of the doctrine of God and man in one Person. They speak in a dreamy, shadowy way of Christ's divinity; but, when their meaning is sifted, you will find them very slow to commit themselves to any statement sufficient to express the Catholic dogma. They will tell you at once that the subject is not to be inquired into, for that it is impossible to inquire into it at all without being technical and subtle. Then when they comment on the Gospels, they will speak of Christ, not simply and consistently as God, but as a being made up of God and man, partly one and partly the other, or between both, or as a man inhabited by a special divine presence. Sometimes they even go on to deny that He was the Son of God in heaven, saying that He became the Son when He was conceived of the Holy Ghost; and they are shocked, and think it a mark both of reverence and good sense to be shocked, when they hear the Man spoken of simply and plainly as God. They cannot bear to have it except as a figure or mode of speaking, that God had a human body, or that God suffered; they think that the "Atonement," and "Sanctification through the Spirit," as they speak, is the sum and substance of the Gospel, and they are shy of any dogmatic expression which goes beyond them. Such, I believe, is the ordinary character of the Protestant notions among us on the divinity of Christ, whether among members of the Anglican communion, or dissenters from it, excepting a small remnant of them.

Now, if you would witness against these unchristian opinions, if you would bring out, distinctly and beyond mistake and evasion, the simple idea of the Catholic Church that God is man, could you do it better than by laying down in St. John's words that "God became man"? and could you express this again more emphatically and unequivocally than by declaring that He was born a man, or that He had a Mother? The world allows that God is man; the admission costs it little, for God is everywhere, and (as it may say) is everything; but it shrinks from confessing that God is the Son of Mary. It shrinks, for it is at once confronted with a severe fact, which violates and shatters its own unbelieving view of things; the revealed doctrine forthwith takes its true shape, and receives an historical reality; and the Almighty is introduced into His own world at a certain time and in a definite way. Dreams are broken and shadows depart; the divine truth is no longer a poetical expression, or a devotional exaggeration, or a mystical economy, or a mythical representation. "Sacrifice and offering," the shadows of the Law, "Thou wouldest not, but a body hast Thou fitted to Me." "That which was from the beginning, which we have heard, which we have seen with our eyes, which we have diligently looked upon, and our hands have handled," "That which we have seen and have heard, declare we unto you"; such is the record of the Apostle, in opposition to those "spirits" which denied that "Jesus Christ had appeared in the flesh," and which "dissolved" Him by denying either His human nature or His divine. And the confession that Mary is Deipara, or the Mother of God, is that safeguard wherewith we seal up and secure the doctrine of the Apostle from all evasion, and that test whereby we detect all the pretences of those bad spirits of "Antichrist which have gone out into the world." It declares that He is God; it implies that He is man; it suggests to us that He is God still, though He has become man, and that He is true man though He is God. By witnessing to the process of the union, it secures the reality of the two subjects of the union, of the divinity and of the manhood. If Mary is the Mother of God, Christ is understood to be Emmanuel,: God with us. And hence it was that, when time went on, and the bad spirits and false prophets grew stronger and bolder and found a way into the Catholic body itself, then the Church, guided by God, could find no more effectual and sure way of expelling them than that of using this word Deipara against them; and, on the other hand, when they came up again from the realms of darkness, and plotted the utter overthrow of Christian faith in the sixteenth century, then they could find no more certain expedient for their hateful purpose than that of reviling and blaspheming the prerogatives of Mary, for they knew full sure that, if they could once get the world to dishonour the Mother, the dishonour of the Son would follow close. The Church and Satan agreed together in this, that Son and Mother went together; and the experience of three centuries has confirmed their testimony; for Catholics who have honoured the Mother still worship the Son, while Protestants, who now have ceased to confess the Son, began then by scoffing at the Mother.
Posted by davidforster at 14:16 1 comment:

I probably shouldn't abuse my power by plugging events, but...

The Prior and community of the Dominican Priory of the Holy Cross Leicester are pleased to announce:

The Feast of the Immaculate Conception, Wednesday 8th December, 2010 at 7pm

Followed by the consecration of a Shrine to the English Martyrs.


I think I am correct that this will be the first Pontifical High Mass of a Bishop in his Diocese for a very long time indeed! It would be wonderful to have as many people as possible attend this.

Clergy are invited to sit in choir. Please bring Cotta and biretta, and stole if receiving communion. Please could you inform me at the e-mail address below.

If any clergy or servers who feel they would like to be part of the sanctuary party, please contact me at r_hawker@hotmail.com. They would need to be free to attend a few rehearsals.

Richard Hawker,
Sacristan & Master of Ceremonies,
Priory of the Holy Cross,
Leicester
Posted by Richard Hawker at 21:52 No comments: 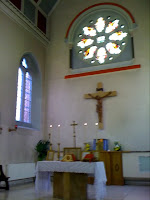 One of our members, Dr Matthew Doyle, who is LMS rep for Birmingham and the Black Country, reports that a successful training day was held yesterday, on the Feast of the Holy Angels, at St. Michael's Church, West Bromwich.

As a native of South Staffordshire, I am delighted to hear that tradition is making advances in the Black Country.

A full report can be found here:﻿
http://birmingham-lms-rep.blogspot.com/2010/10/black-country-training-day.html
Posted by davidforster at 12:21 No comments:

Regina Angelorum. Prayer to Our Lady Queen of Angels

August Queen of Heaven, sovereign Mistress of the Angels, who didst receive from the beginning the mission and the power to crush the serpent’s head, we beseech thee to send thy holy angels, that under thy command and by thy power, they may pursue the evil spirits, encounter them on every side, resist their bold attacks, and drive them hence into the abyss of woe.

Most holy Mother, send thy angels to defend us and to drive the cruel enemy from us.

All ye holy angels and archangel, help and defend us. Amen.

O good and tender Mother! Thou shalt ever be our Love and our Hope.

Holy Angels and Archangels, keep and defend us. Amen


Regina Angelorum, ora pro nobis. Our Lady Queen of Angels, pray for us.
Posted by davidforster at 00:01 No comments: