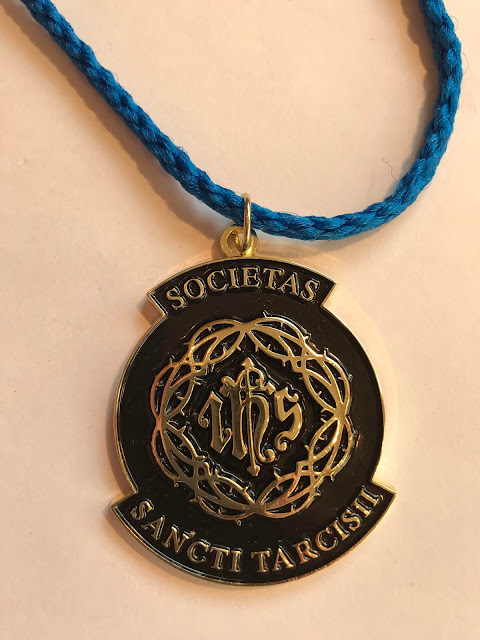 The medal of the Society of St Tarcisius is a solid, enameled, die-cast medal with raised design and lettering; it is provided free to all new members at their enrollment, when each medal is blessed.

It is based on the design found on a black High Mass set of vestments belonging to the Latin Mass Society.

This particular set was purchased in memory of a deceased member, John Arnell. It dates from the early 20th century, and was probably made in France. It is richly decorated with silver thread.

The central motif of the chasuble and cope is the mongram I.H.S., with a cross, surrounded by a crown of thorns and a quartrefoil.

This monogram, of ancient origin, was particularly promoted by St Bernadine of Siena in the 15th century, in the context of the devotion to the Holy Name of Jesus.

Its common combination with a cross also suggests the sign given to the Emperor Constantine before the battle of the Milvian Bridge in the year 312: 'In Hoc Signum (Vinces)', 'In this Sign (you will conquer)': the sign of the Cross which Constantine had painted on his soldiers' shields. His victory led to the Catholic Faith being made the official religion of the Empire.

It can similarly be understood as 'In Hac (Cruce) Salus', 'In this (cross) is salvation'.

The crown of thorns surrounding it reminds us of the Passion of Our Lord, in which each of us is called to participate throughout our lives.

The quatrefoil, made up of four overlapping circles, is a shape commonly used in ecclesiastical architecture, particularly for windows. This again emphasises the cross, and also the four corners of the earth and the four evangelists.